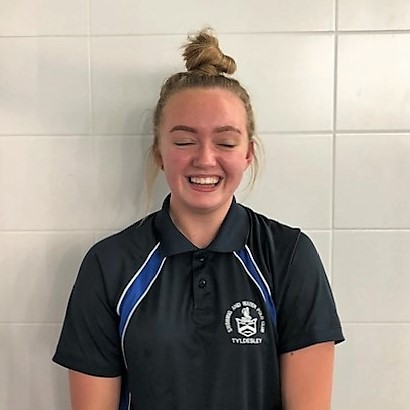 Holly joined TSWPC at the age of 5 where she learnt to swim, then later at the age of 9 started water polo. Holly represented the club in numerous galas however water polo was always her preferred sport and so she began representing the clubs under 12s local league team, followed by under 14s, then under 16s. She is now a key player, and one of the top goal scorers, for Tyldesley ladies water polo team who compete in the highest division of the British water polo league.

“Being part of  a club like this mean I get to enjoy my sport whilst forming friendships for life.”

As well as this Holly has represented the North west region in U14s, U16s and U18s inter-regions. She has captained the region to win many titles and has been crowned MVP (most valued player). Holly has represented England in the North Sea cup where she was named captain and was England’s top goal scorer as they were crowned champions. Her most recent accolade was being chosen to represent GB in the U17s age group in Croatia!

Other than spending time in the pool, I enjoy going to the gym and socialising with my friends.